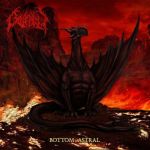 BURTUL is a horde hailing from St. Petersburg in Russia that is active since 2010. Already in 2014 they released this debut release called "Bottom Astral" via Satanath Records. Their style is brutal US-styled Death Metal. The band’s influences are obviousy bands like CANNIBAL CORPSE or SUFFOCATION so the direction should be clear. The typical trademarks can be found as brutal blast-beats, pounding double-bass, hellish and brutal guitars with several breaks and the typical deep grunts. Mostly uptempo and brutal, the band slows down the pace from time to time and fine melodies as well as very good guitar solos in the vein of MORBID ANGEL find their way into their sound. The songwriting is varying what keeps this output interesting. Also some freaky guitar and bass tunes have been incorporated, so these guys really seem to be technical Death Metal nerds and combine this with the intensity of brutal Death Metal. The lyrics cover topics like war so the band could be the Russian answer to the mighty HAIL OF BULLETS. The production is fine with a proper mixing but could be a bit thicker here and there but definitely ok. Recommended tracks are ‘PZ Panzer’, ‘Luftwaffe’ and the outstanding ‘Osvensim’ with some nice guitar and sound effects and remind me a bit of a Death Metal version of MARDUK. Definitely a newcomer worth to check out and to keep an eye on their upcoming works. For more info, please check the band at the following locations: http://vk.com/burtul, www.satanath.com