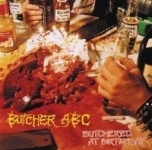 Raw Gore Grind from Japan! BUTCHER ABC were formed back in 1994 and split up in 1996 without any recordings. Six years later they joined forces again and after some promotional demos and appearances on compilations they have now released their debut MCD. The four-piece consisting of "Analtoshit" (Axe grind and vomit), "Barbequeen" (Bolt throw and slaughter), "Chemi-Kill" (Chainsaw) and "K" (Killing technology) are obviously huge fans of early Grind / Death Metal and fairly skilled musicians but unfortunately that doesn’t help this release to be more than good genre standard. The sound of the four songs plus intro is raw and straightforward and vocalist "K" does a good job but all in all the songwriting is still not rousing enough to make an impact. For absolute Gore Grind Maniacs this might be another piece of gory flesh in their underground collection, for the rest BUTCHER ABC are not interesting enough. On www.obliteration.jp you can find a mp3 file of the title track.