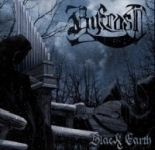 Having not heard a single song of Norwegian BYFROST made this a first acquitance and a very pleasing one. They perform not the Black Metal I expected, but more a modern and powerful Thrash sound with hints of Black, mainly in the vocal department. Their "Byfrostmetal" EP from 2008 received good reviews everywhere, as far as I know. Three tracks from the EP are also featured here, namely ‘Night Of Damnation’, ‘Wings Of The Angel Of Death’ and the killer ‘Lord Victorious’. "Black Earth" will probably be hailed as well since the level is very high in almost every aspect. Actually the new tracks are more mature and powerful. The technical capacity and instrumentation is absolutely awesome and tight as hell. Only in terms of originality I had some doubt… the new tracks (like ‘Black Earth’ and ‘Desire’ to name a few) have a vibe very similar to the latest IMMORTAL (although not that fast). Also Heavyharms’ vocals resembled Abbaths style although not that raspy. Actually the vocals sound more like Ihsahn or even Jeff Walker ("Heartwork" e.a.) but because of the overall sound it leans to IMMORTAL. Well, I could accuse them of plagarisation but BYFROST delivers a solid, epic and powerful release that I really enjoyed listening. Although it’s far from underground, it’s just too tempting to resist, sorry. People who regulary freak on DISSECTION, IMMORTAL, late CARCASS will definately have their kicks on this one. Actually everybody should check it out, because it’s awesome! Just listen to last track ‘Skull Of God’ with its perfect ending… very Metal! I bet you can see them billed on the bigger festivals next year…Check www.myspace.com/byfrostmetal for more info.