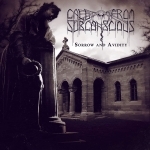 Once upon a time, deep deep down in Germany, in the Weißbier driven Bavaria, a young hopeful Death / Doom band roamed the ghastly black nights, looking to break through the barriers of gloom and get their music out to the masses. Though after two demos and an appearance on “Only Death Is Real Vol. 2”, with the track ‘Nosferatu’, CALL FROM SUBCONSCIOUS disbanded and forever disappeared in shadows and dust. That was until Kostas from Repulsive Echo Records excavated deep in the Bavarian mountains and forests and struck gold, which now is released as “Sorrow And Avidity”, entitled after a track on the band’s first demo “Fading Flowers”. “Sorrow And Avidity” is displaying CALL FROM SUBCONSCIOUS’ two demos from 1995 and 1996, the already mentioned “Fading Flowers” and “Inner Dimensions”. If music of this quality and atmospheric feel and touch was delivered by a young band today, together with the consistency and progression over two demos that CALL FROM SUBCONSCIOUS showcased back in the mid nineties, the band would have been a big signing right away. The music is dreamy and quite hooking, it has a gripping dark atmosphere dripping with an eerie ghastly backdrop. The first demo has together with the dark Death Metal a wee touch of a medieval atmosphere, due to the vivid use of flute, which works quite well most of the times, though lacks a tad of power in the mix, at others, though overall a strong feature. The second demo is more straightforward, doomier and darker, with a touch of melodic guitar work, inspired by the Swedish scene exploding at that time. The pace is more varied, we are getting furious blast beats and echoed growls from down below. “Inner Dimension” is a quite aggressive output, even though the driving force is still the gloomy doominess. Kudos to Repulsive Echo for getting these two demos back into the world. I don’t recall having heard of the band back then, or a little later. Though it has been on heavy repeat for quite some months now, as the material is quite strong and ripping! This is sorrow and avidity! www.facebook.com/call-from-subconscious-277769396497900, www.facebook.com/repulsiveecho