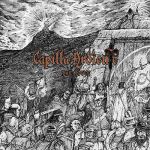 Chile’s CAPILLA ARDIENTE (meaning "Burning Chapel") consists of members from a plethora of bands we all know… Felipe Plaza Kutzbach (DESTROYER 666, NIFELHEIM) on vocals, Julio Borquez (ATOMIC AGGRESSOR) on lead guitars, Igor Leiva (POEMA ARCANVS) on rhythm guitars, Claudio Botarro (PROCESSION) on bass and Francisco Aguirre (BLACK CEREMONIAL KULT) on drums. And instead of the aggressive, harsh sounds their other bands create, CAPILLA ARDIENTE are instead an Epic Doom band with clean, Power Metal – tinged vocals. And thank god for not repeating what their other bands have produced. It caught me off guard once I realized who they are (after first listening to the album). It actually gave me more appreciation for the style they play on their second full-length "The Siege". ‘The Open Arms, The Open Wounds’ begins with a classic doomy sound before jettisoning into a more upbeat, though mid-paced flow. It struts, it swaggers, it glares as the riffs swarm in a confident swirl of Metal goodness. ‘The Crimson Fortress’ sounds like an oncoming storm thundering its way slowly towards the onslaught of the land. This is truly an experienced band that takes control of the 45 minutes of their time they allow us to be in their presence. Felipe sings, not growls, not snarls, but sings. And the vocals are pure 80s Doom / Power Metal. The third track ‘The Spell Of Concealment’ shivers, shudders and shakes as the guitars reach up and pull down, climb higher and step lower. The final track ‘Fallen Alphas And The Rising’ screeches and vibrates with its wailing guitars, towering drumming and not-quite-hidden-in-the-mix deep basslines. Each of the tracks is epic in its own way. Whether you’re a fan of their bands or not, CAPILLA ARDIENTE is a force of its own which can be appreciated by pretty much any Metal obsessed waste of flesh which we are destined to be. "The Siege" is quite glorious. For more info, check out www.facebook.com/capilla-ardiente-276244682414001, www.hrrecords.de