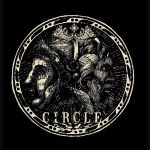 CARONTE was formed in Parma, Italy by Dorian Bones during the now far 2011. They have released four LPs and three EPs to this date. The third EP of their discography is entitled “Circle” and was released by Ván Records. CARONTE plays Doom / Stoner Metal (or should I say, “played”), having topics such as occultism, esotericism and some works of Crowley as an influence for their lyrics and visual concepts. “Circle” is composed by four songs, where each one of them is a collaboration of different artists / bands that are part of the Metal genre or some Rock style. In general, the production of this release is good. Every instrument has its own life and distinctive sound. The first track is ‘Black Flames’ and the Austrian band of OUR SURVIVAL DEPENDS ON US is featured in it. In my opinion, this is the greatest song in “Circle”. The music and vocal methodology is what has been characterizing CARONTE in the Doom / Stoner Metal subgenre for over a decade. The choruses are catchy, the organ and the percussions embraces the other instruments in an hipnotic atmosphere. In ‘Black Flames’ the guitar melody made me remember some of the earlier material of CARONTE, when the voices delivered a lot of melancholy and mysticism. Well, ‘Cauldron Of Ecstatic Loneliness’ is the second song and it features FIDES INVERSA, a Black Metal entity from Italy. This compilations of sounds could have been another band, because the riffs and vocals could be associated sometimes to the Death / Occult Rock subgenre. It has the most commercial experience in “Circle”. But EPs are made for this kind of actuate, to experiment or follow another musical path in the next releases. ‘Solar Void Of Yule’ is the third musical piece of this CARONTE release and Swiss Avantgarde Black Metal band SCHAMMASCH is featured on it. The track starts with a synthesizer / organ that creates a good structure, following some riffs and growls that sounds as Black Metal, but as the song keeps on developing, the changes on it are kind of innecesary,almost uncomfortable. The way the clean vocals are sang (in minute 2:45 and 6:01, specially), lost me completely. ‘Solar Void Of Yule’ has a really strong influence of Post Punk and Death Rock. It can be a commercial success in the horrible services of streaming. I had to stop listening to it after the 15th time. CARONTE made me think of HORROR VACUI and BEASTMILK. ‘Flowers Of Lucifer’ is the last track and it features KING DUDE. That’s all I have to say. I hope that in a near future all the fever for the Post Punk, Death Rock and all that kind of stuff gets completely lost. More info at: www.facebook.com/ferociailluminata, www.facebook.com/vanrecs