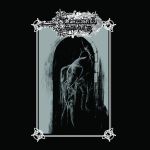 I was subjected to a real torment here. My ears suffered while listening to this album by one man Black Metal (I use the term very losely) entity from U.S.A., called CELESTIAL SWORD (apparently the name came from a video game Dungeon & Dragons, which I won’t even start with). Since I’m pretty much lost for words, I’ll let myself cite their label’s PR blurb which was put out to accompany this release. This is how this “music” is being described: “Black Metal played by this entity pays homage to the early ’90s scene. A cemetery-like atmosphere evoked by haunting keyboards, a dirty and raw to the bone sound and vocals that come out of the forgotten depths of a soul full of pain and vampiric longing.” Now let me tell you, that is fake PR for sure. In fact, what you get is total crap. Imagine if some old BURZUM rehearsal tape was playing on the telephone and someone was playing synthesizer melodies over it and the artist was standing in the next room and recording the whole thing on their telephone through a keyhole. This is the kind of “raw” sound you would be subjected while tormenting yourself with this crap which I can’t even call music. This is way more about the lo-fi elitist hipster kvlt hype than anything else. If you’re really proud and stand by your music, let people actually hear it instead of burying down deep in the shittiest production imaginable. For those who feel masochistic, here’s a link to the label: www.facebook.com/morbidchapelrecords. Everybody else stay clear from this CELESTIAL SWORD. https://celestialsword.bandcamp.com