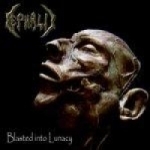 CEPHALIC from Austria play fast technical Death Metal that reminds me of NILE without that Middle East aspect every now and then, especially the vocals. Brutal and sick to the max. Luckily, the sickos don’t belong to those hordes of faceless faster-harder-louder clowns I’m getting sick and tired of at the moment. CEPHALIC know how to integrate groovy parts that first of all will be of advantage in live situations and secondly make the blast parts sound even more aggressive. Check out the melodic part in ‘Death Throes’, for example. This plus a considerable amount of craziness speak for a highly enjoyable album. On the other hand, if I compare "Blasted Into Lunacy" with the latest hit album by IMMOLATION, for example, I have to admit that CEPHALIC’s songs don’t really enter my mind but I’m not a musician anyway and I simply love albums I can sing along after a while (just like "Unholy Cult"). "Blasted…" still lacks a certain evil atmosphere as well but as I’m getting more and more picky about this aspect lately, I’m sure many of you will like this one indeed. Two further points of criticism: the high pitched snare sound sucks big time and the last track has nothing to do with Metal at all! Mr Cthulhu lately told me that stuff like this is called Break Beat and as far as I know there are quite a few really extreme Death Metal fans who fancy shit like this as well. Let me cite Mr Dee Fucking Snider at this point: "If it ain’t Metal, it’s crap!" But as this is just one song I guess one should give ’em a chance… great artwork, by the way! http://cephalic.deathmetal.at/