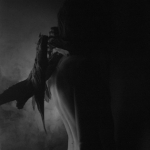 "Amissum", as now released by Hellthrasher Productions, is the extended version of an EP digitally released last year (now with two bonus tracks). And CHAOS MOON is a kind of one-man band, Alex Poole of KRIEG, with Erik Baker handling the vocals. This is largely slow to mid-paced Black Metal that strives above all to create a brooding and dark ambience, with a lot of doomy moments, unadorned grim riffs and wails of despair and morbidity. Sometimes they also aim for some speed, such as in the title-track (with its furious and chaotic drumming), but they are far more a band for the gloomy intros and the frozen-forest, mid-90s DARKTHRONE guitars albeit slowed down, with a lot of reverb on everything and always accompanied by morose and repetitive keyboards. There is some variation; I guess ‘Resurrection’ parts I to III share much the same mood, but then ‘To Transcend The Spine’ is faster and even comparatively uplifting, with the pervading synth like a trip down a psychedelic wormhole. And, in closing, a more typical Black Metal track with an obvious drum machine. It does have its fine moments, but this heavily atmospheric, slow and very depressive music doesn’t really do much for me; I take my Black Metal old school. Still, if you are into stuff like ALTAR OF PLAGUES, ALCEST and the likes you’ll certainly enjoy this. In such case, check out the following sites: www.facebook.com/pages/chaos-moon/111626415515769, http://chaosmoon.bandcamp.com, www.hellthrasher.com