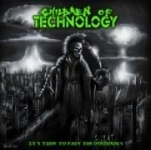 CHILDREN OF TECHNOLOGY
It's Time To Face The Doomsday
(Hells Headbangers)
24:50min

CHILDREN OF TECHNOLOGY from Italy prefer the ancient style and worship the old Speed / Thrash Metal on their first full length “It’s Time To Face The Doomsday”, released on none less than the awesome Hells Headbangers Records! You probably have seen their name before, since they released a load of splits prior to this album. The energy and cool rocking vibe this genre is usually performed with is always a pleasure and CHILDREN OF TECHNOLOGY don’t fail either. Do I really have to name similar bands to the Voices readers to get a clue how this sounds? Don’t think so, but if you like bands ranging from SODOM, VENOM, MOTÖRHEAD, DESTRUCTION and a slow version of BESTIAL MOCKERY. Vocalist DeathLord Astolfi sounds like a mix of Lemmy and Denis Bélanger from VOIVOD. And when the sleaziness of Punk doesn’t bother you either, get yourself this fine lesson in headbanging. Their logo looks a bit like TOXIC HOLOCAUST and also musicwise this comes close to these American party animals. Personally I prefer CHILDREN OF TECHNOLOGY above TOXIC HOLOCAUST. Well it doesn’t stick to booze and fun and a track like ‘No Man’s Land’ and ‘Nuclear Armed Dogs’ (despite it’s stupid backing vocals) shows the quality of CHILDREN OF TECHNOLOGY due to perfect catchy riffing, pounding drums and a chorus that would make this song still enjoyable even if it lasted a full hour. Perfect music for a long drive OR alcoholic party! With 8 tracks in 24 minutes you need a repeat-button on your player. More info and soundbytes: www.myspace.com/childrenoftechnology, www.hellsheadbangers.com