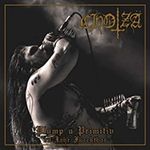 Black Metal in Swiss dialect – at first I thought it was a very special idea. But then it occurred to me that there are quite a few Black Metal bands that do not sing in English but in other languages, also and especially in dialects. Therefore this album is not that extraordinary. “Plump U Primitiv” (roughly translated “crude and rude”) is celebrating the band’s tenth birthday. It is a re-recording of the first full-length of the same name, originally released 2014, limited to 100 copies. Since I do not know the original edition, I can give you no information about the difference regarding the sound between the two versions. Furthermore two new songs are added. While the song titles come across as pretty rough, the music is not far away from Black Metal in the vein of DARK FUNERAL, MARDUK or BEPLHEGOR. So do not be fooled when CHOTZÄ are labeled as Black’n’Roll / Punk. Instead it is a very orthodox interpretation of the second wave of Scandinavian Black Metal. Surely raw and brutal, but far away from stuff like “Latex Cult” by IMPALED NAZARENE or an outfit like EWIG FROST. One of the bonus songs is entitled ‘Schtumpf Isch Trumpf’, which can be translated with blunt is trump. But instead the song starts with an acoustic guitar, spoken words and breathes more the epic atmosphere of early DIMMU BORGIR than anything else. So there is a clear mismatch between image and music. Personally I do not care, since the album is a good one, but I think some people may be irritated. Further information can be found at www.facebook.com/mundartblacknroll and www.facebook.com/folterrecordsgermany