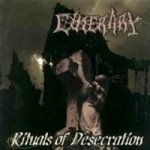 Atmospheric intro (from a film?), then: total devastation! I bought this CD because they were supposed to sound a bit like PYAEMIA (great SUFFOCATION fans) and to some extend that’s right. What at first completely distracted my attention were the vocals: I can’t help it, they remind me of a hammond organ!!! I know Konni’s (GALLERY OF DARKNESS / DESPONDENCY) vocals are developing this way as well and as he would probably never use any effects, I guess this sound is still natural, just more extreme than “ultra-guttural”. There are interludes in between the songs that remind me a bit of MORTICIAN and CINERARY’s Death Metal is quite fast indeed (not that fast, though). So probably this is the missing link between MORTICIAN and SUFFOCATION and fans of those bands should get a hold of “Rituals Of Desecration” indeed. Furious hidden track with additional female (??? – probably not) very crazy vocals. www.violatedrot.com/cinerary