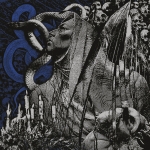 The moniker CO2 is an abbreviation for CAMERA OBSCURA TWO and their present release starts with a sample (“One by land, two by sky…”) from the horror film “Encounter with the unknown” from 1973. The movie was promoted with the slogan “An incredible journey into the supernatural”. I only wish I could say the same regarding “D.Ö.D”. Because the album is simply boring. Musically an eerie mixture of D-Beat Crustcore and Speed / Thrash Metal. Interestingly enough the band uses two bass guitars. Generally a promising mixture, but it is done without energy and power. Accordingly elements like memorability, esprit, compelling ideas and well-crafted songwriting are missing. What really makes me doubly furious is the playing time, because it is simply a bad joke to me. First there is an intermission of more than six minutes. And that pause is followed by two tracks with a playing time of together eight minutes. And those tracks are old ones, originally released by SCHIZO (a famous Thrash Metal band from Italy, established 1984) as promo respectively demo tracks in 1998 and 1987. The connection is bass player Alberto Penzin, who is active in both bands. Anyway, in fact if you buy this CD you will get just 14 minutes CAMERA OBSCURA TWO. From my point of view Selfmadegod Records is a respectable and creditable company, but “D.Ö.D” is in my eyes a bluff package. Just in case your are still interested or a die-hard SCHIZO maniac, here are the links for more information: www.facebook.com/cameraobscuratwo, www.selfmadegod.com