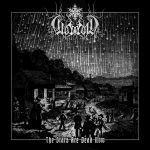 Usually Eisenwald Records from Germany are a safe bank when it comes to Black Metal releases, but in this case it is not a new record. Instead “The Stars Are Dead Now” is a re-release and a more than necessary one. First published in 2005 the EP was quickly sold out and several times re-issued. Although I am not a historian, COLDWORLD were one of the first bands from Germany playing such style of Black Metal. At the beginning of the century there was a wide-ranging discussion if this style still is Black Metal or a new style. SHINING released their debut “Within Deep Dark Chambers” in the year 2000 and many Black Metal bands and fans unleashed a wave of repelling criticism towards Depressive / Suicide Black Metal. That is 20 years ago by now and nowadays the extreme music scene is so heterogeneous and there are so many styles and bands that no one is willing to spend time with discussions whether their music is true (preferably written trve) or not. And the few who still do so should find a better spare-time activity, in my opinion. But back to “The Stars Are Dead Now”, the EP was the first release by COLDWORLD and defined the core of what later was filed under the name Depressive Black Metal. A dynamic combination of slow and fast parts, distorted vocals and heavy use of keyboards. All under the sign of depression, despair and melancholy. The second song ‘Hate’ even incorporates a seamlessly fitting aggressive mid-tempo marching beat like part, showing the excellent songwriting skills of Georg Börner, the one responsible for this one-man band. The EP is remastered and provided with two bonus tracks, ‘Dead Stars’ and ‘Ragnarök’, which have a bit more traditional Black Metal approach, but stylistically not too far away from the other songs. “The Stars Are Dead Now” is interesting not only for all fans of the genre but also for all those who eagerly want to know what Depressive Black Metal sounds like. Listen to this output, it will not get much better. More about band and label can be found at www.facebook.com/coldworldofficial or www.facebook.com/eisenwaldofficial