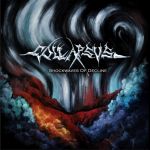 Nearly 20 years after releasing two demos French based Death Metal outfit COLLAPSUS is releasing the first official output, an EP called “Shockwaves Of Decline”. The times are long past when self-financed releases often lacked of solid sound, so the half an hour music is recorded with an adequate quality. About the cover artwork I am still undecided. Somehow it looks like drawn by an amateur, otherwise a pleasant contrast to all the black and white artworks used so often. And it pretty fits to the title and the lyrics, which deal more with emotions like deprivation and failure, less than with undead corpses crawling from the graves. Four songs are featured on this EP, two short ones with a playing time of six minutes and two clicking at ten minutes. The two shorter ones, ‘For A While’ and ‘Final Serenity’ are more fast-forward and compact, reminding me of the later works of CARCASS like the album “Surgical Steel” from 2013. The two longer tracks ‘A Time To Pass Away’ and ‘Let Me Die At Last’ incorporate, hardly surprising, more frisky and playful elements like clean singing, many guitar solos and rhythm changes. That kind of melodic Death Metal IN FLAMES and DARK TRANQUILLITY cultivated before they went into limbo respectively started wearing flared trousers and focused on playing Alternative Rock. “Shockwaves Of Decline” is available as digital download and as digipack CD for 10 € (plus p&p) and all Metalheads interested into melodic Death Metal should visit https://collapsus1.bandcamp.com and www.facebook.com/collapsus95 to get a satisfactory dose of Death Metal. Hopefully we did not have to wait nearly 20 years again for the next release!