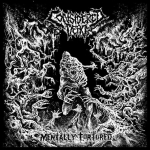 CONSIDERED DEAD are a fresh new band from Brazil, that’s named after an album from classic techno Death Metal heroes GORGUTS. So, somehow this raises certain expectations of how this band might sound on their first effort. But let’s start from the beginning, that is two years ago. Merited VIOLATOR members Batera (drums) and Capaça (guitar) teamed up with LOWLIFE guitar player Marcão and former PESTICIDE bass player and singer Yarlles Pinheiro in Brasilia to start a new band. They chose their name from aforementioned old school Death heroes, even though they didn’t really sound like them. But this is not the worst, in my humble opinion. Instead, their sound might be massively influenced by the old school of not too technical North American Death Metal and the first efforts of their famous country mates SEPULTURA. This makes up a maybe old fashioned, but deeply honest and fresh sounding kick in the face. “Mentally Tortured” was originally put out by the band as an independent release but impressed Rico from F.D.A. Records so much that he will release it again on tape and CD. And since we know that Rico has an excellent taste, we have another good point for CONSIDERED DEAD. These almost twenty minutes will be satisfaction guaranteed for every Deather, believe me! And with a smash hit like ‘Impulsive Resistance’ with its Hardcore styled chorus up their sleeves, CONSIDERED DEAD seem to have a brilliant future with fine albums to come. Check them out at: www.facebook.com/consideredead, and visit the label: www.fda-records.com