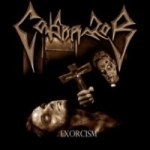 CONSPIRATOR offer a convincing assault inspired from a healthy and diverse number of sources. Unarguably, the most apparent inspiration is from Thrash Metal à la ATROPHY, HEATHEN and other bands from the final wave of 80s Thrash, an influence that is even more obvious in the guitar solos that sound like something KREATOR forgot to use on “Coma Of Souls”. Second, CONSPIRATOR are obviously Death Metal fans, at least of the sort of Death Metal that kept many of Thrash’s elements within it like ATHEIST. Unfortunately, while this is certainly a formula for potential, it suffers from a flat, digital production. That appears to be the way of half the Thrash albums released today. However, the album should please even with a production that doesn’t do it justice. www.myspace.com/conspiratormetal