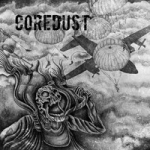 COREDUST is a Finnish Metal band that was formed in early 2007. The band’s 4-track EP titled "Past Lives", has received lots of positive feedback especially in their safe home territory, Finland. The core of the band is built around Esa Salminen (on vocals), Sakke Hulkkonen (on guitar) and Olli Broman (on bass) – and Jaska Raatikainen from CHILDREN OF BODOM, handling drums on COREDUST’s debut full-length release, "Decent Death" (also this recording including contributions from Antti Maasilta on keyboards, also Suvi Kuusela and Sammy Salminen doing some guest vocals). Got already enough background info about them? Good then, as I wasn’t intended to provide any more of it. As far as the music on the disc goes, well, we certainly cannot blame these fellows for a lack of originality. They indeed sound like a pretty unique sounding outfit, mixing Thrash Metal, Death Metal, Groove Metal, Progressive Rock, etc. into their one thick package. But that’s the end of any other positive related things about this stuff. Instead of combining multiple different styles together, the guys should seriously try to focus on one or two Metal styles only, just to make their stuff more accessible and easier for listeners to digest to (or perhaps it’s just me who hasn’t been in the loop for a long time as far as today’s modern Metal is concerned?). On "Decent Death", COREDUST do have too many things going on – and in the end the whole outcome starts more and more to irritate you than please your ears. COREDUST even made a cover version for ‘It’s No Good’, which happens to be a DEPECHE MODE song (unless some of you didn’t know?). Actually why even bother because as a sad wholeness, this record’s only purpose is meant to gather a pile of dust on the top of it. Tried it out as a Frisbee already too but it didn’t feel like much of fun. Oh dear… more about them anyway at: www.coredust.com, www.inverse.fi