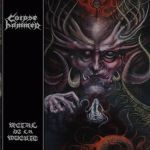 The album title is easy to interpret, it is simply Death Metal. And as uncomplicated as the translation the music presents itself on “Metal De La Muerte”. The major influence on this debut is HELLHAMMER and the early works of CELTIC FROST. During all nine songs the focus is on the riffs, the guitar work sounds like directly taken from the early eighties. If you like this kind of riffing this album is pure hearing pleasure. Regarding the songwriting the songs develop more slow, not too fast, although the speed paces up every time without tipping over to sheer blast beat frenzy. An odd thing are the vocals, some kind of deep shouting, not grunts nor high shrieks. Instead at some moments the vocalist uses some kind of clean singing / shouting, which DARKTHRONE used a lot during their latest releases. Since we all know Fenriz and Nocturno Culto are nowadays more influenced by eighties Metal than anything else, the name CORPSEHAMMER should appear on the wish list of every fan of albums like “Old Star” or “Arctic Thunder”. The more I listened to “Metal De La Muerte” the more I got the impression CORPSEHAMMER are practicing the same like DARKTHRONE. Writing some riffs which sound old school as hell and using a songwriting approach more easy and not too complicated. Very enjoyable. So do not be fooled by the cheesy cover artwork and visit www.facebook.com/corpsehammer-656124584543696 or the label www.bestialinvasionrecords.com to get a deadly dose of good old fashioned extreme Metal.