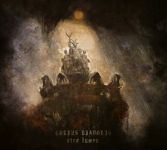 This is actually the third album from these four French demons, creators of a very interesting form of Doom / Black / Death. Although they do use the doomy auras in a very effective way, when they decide to play in faster tempos they do it pretty well. In fact at times they reminded me of MAYHEM from the “Mysteries…” album, specially the guitar tone has a similar sound. Some sounds can be related to GEHENNA from their masterpiece “Malice” and earlier SAMAEL also comes to mind. On the other hand I can sense CELTIC FROST and POSSESSED influences. CORPUS DIAVOLIS is able to conjure melody in a quite good part of their music, but they are also able to create epic atmospheres and quite dark landscape forms into one’s mind while listening to this offering to the dark one. Also the production and musicianship values are of the highest caliber, so much that at times the band is able to showcase some rather quite technical and a bit of progressive touches. I would like to point out the incredible performance by vocalist and bass player Daemonicrator, who does both things in a great way, playing his bass with a thunderous sound and also doing some of the most evil, hypnotic vocals and doing so with variety and emotion as the music needs it. At times the music sounds like the soundtrack to the apocalypse like one can hear in the doomy, ethereal yet dark sounding first minutes of the song ‘Sign On End Times’ that then explodes into a burst of darkness and evil Black Metal of the highest caliber. This is more than just an album. It is a journey through darkness, to find a place like the one depicted in the cover art, a place with no hope, no light and just obscurity… www.facebook.com/corpusdiavolis, www.atmf.net