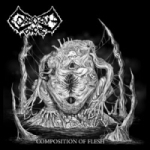 Swedish Death Metal continues its roll and the new breed of bands continues their conquering of the world. I first encountered CORROSIVE CARCASS back in 2010 when they released their demo "Rot.In.Pieces", a demo that I was hugely impressed by and gave a nice review over at Nocturnal Horde. I actually believed they would get a debut full length album ready sooner than this, though they did use 6 years to make their demo, so I reckon 2 years are rather fast in the terms of CORROSIVE CARCASS, even though 7 of the 13 tracks on "Composition Of Flesh" are reworked and re-recorded tracks from the demo. This is classic Swedish Death Metal of the grimmest and brutal kind, you are getting turned upside down, thrown around and ripped open during the 40+ minutes the album runs. Intelligent songwriting with a brutal edge all the time, heavy as fuck buzzsaw riffing that’s memorable and intense, the rhythm patterns are also downright brutal and energetic and drives the songs ahead, tearing down all on its way. The bass is insane as well, it has a really prominent role in the soundpicture, and its noisy lines can be heard all the time through out the album, paving the dirty road for the rest of the band, a really solid and sludgy bottom. The vocals were sick on the demo, though even sicker on this album, the deep guttural growl slashes, the screams are chilling and the vocals out of this world are just scaring, great work all around. CORROSIVE CARCASS has come a long way since "Rot.In.Pieces" and is playing very well together as a band now, the way the guitar leads and melodies work on the album compared to the demo is quite a step up. The production on "Composition Of Flesh" is also stellar and fitting the music really well. A dark and intense sound, blasting and clear when needed and raw and dirty when the buzzsaw sets off. If the band keeps up the quality and pens some new tunes within the next couple of years, and spits out an album with the same impact as this, then they’ll create some havoc and rave. A good mix of all the classic Swedish Death Metal bands with CARNAGE / DISMEMBER as the main inspirational source and a good deal of youthful energy and intensity and well crafted tunes, make this release memorable and bangable! Get into the pit: www.facebook.com/pages/corrosive-carcass/142603437551, www.officialabyssrecords.com