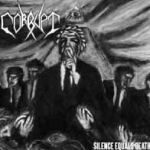 I follow this band already since their great and already sold out split EP with NECROVATION where they offered the song ‘Chain Of Command’ as well as a very good cover version of the MERCYFUL FATE song ‘Curse Of The Pharaohs’. After buying this cool release I had a look on their homepage and downloaded their ‘Born Of Greed’ demo as well as the brilliant ‘Kill Again’ Slayer cover. So what else could I do when I heard that Blood Harvest Records will release a 7"EP with CORRUPT? Honestly spoken I don’t like their name so much and when I first heard that name I thought they are a Crustcore / Hardcore band because of it, but I was totally wrong as CORRUPT has dedicated themselves to old school Thrash Metal in the vein of the early releases from SADUS, MERCILESS or KREATOR. 4 songs, mostly highspeed with (which is amazing for such an underground release) a fantastic sound. Once again Blood Harvest Records succeeded with their selection of great newcomer / underground bands. I’m happy that with a band like CORRUPT old school Thrash Metal is still alive. So, stop spending money on worthless CD releases from all these polished Thrash Metal bands from these modern times and start supporting a band which is really worth your money. Check out the mp3s on their homepage www.shotgundeath.tk if you don’t believe me, but be fast in your decision as once again this is a release strictly limited to 500 pieces and Blood Harvest Records’s myspace-site www.myspace.com/bloodharvestrecords says that only few copies are left – yes, I’m kinda late in reviewing this release, blame me for that!!! Hope you still can buy it via PayPal on the above mentioned myspace-site!