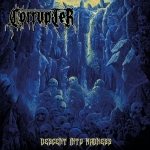 I guess it is no coincidence that the song ‘Horror And Aftermath’ starts with the lines “Blessed are the sick (…)”. Obviously MORBID ANGEL is a huge influence for French based duo CORRUPTER on their debut full-length “Descent Into Madness”. Especially the mentioned “Blessed Are The Sick” album plus the follow-up “Covenant” with its sometimes more slower and twisted songwriting seems to serve as a blueprint for the nine songs. Additionally bands like GRAVE MIASMA, OMEGAVORTEX or TEITANBLOOD seem to have been a source of inspiration. Objectively speaking, the band did everything right. A proper songwriting, powerful sound and although the band was founded just one year ago the interplay of talented musicians works very well. That is why it is maybe a little unfair, but I’m missing a special ingredient, which makes MORBID ANGEL and the other mentioned bands unmistakable. And that is simply the recognition value. Even after dozens of spins I can hardly recognize individual songs. All tracks sound more or less the same, more than once I was surprised the playing time was already over while I was thinking it is still the first track playing. This is of course criticism on a high level and hopefully does not stop anyone from making their own opinions about this solid debut. For more information visit www.facebook.com/godzovwar