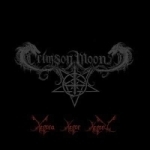 For once it is a bit confusing knowing that maybe there are two CRIMSON MOON bands, so who the hell knows who is who, and what is going to happen, as both sides have been stating that a new album will come out. Oh well… This release we are talking about here is a re-issue of this US Black Metal band’s first album, as well as a new EP on a double CD format with a very nice presentation in digipak format. Probably my only complain for this presentation is that it is way too dark, and sometimes the lyrics are tough to read. Ok, now to the music, this is a product that really showcases what time can make a band progress. The CD that contains the re-issue of the debut album is a very atmospheric, keyboard sounding Black Metal piece. The production is quite raw. I don’t know (or can’t read it on the booklet) if this is re-mastered or something, but I guess it is not. It reminds me of the first GEHENNA release "First Spell" mainly for the use of keyboards, and the overall atmosphere. Also the compositions were rather simple, and it has your average Black Metal shrieks. Blurred in all those atmospheric passages, there are some good songs that are taken away from all power due to the weak guitar sound. Now, the new EP, it is like a completely different band. Gone is the heavy use of keyboards, and the overall sound and execution is obviously different. This is now more brutal, mainly for more present guitars, and it is actually a bit more Death Metal orientated. It has some slight DISSECTION touches here and there, although the overall sound recalls more MAYHEM from the "TDS" album. There are still use of keyboards, but the more guitar orientated production makes the overall sound to be less atmospheric and more direct. Still I feel that unless you are a fan of the band, the re-release of their first album is not that interesting, as it sounds way different from the new material. Obviously this EP is very promising and something to look for the new material released from the band (whomever has the name). www.deathgasm.com