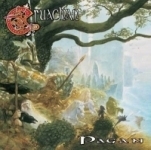 Is this one relevant for Voices? Not really, or rather: almost not at all! The rather old school Black Metal parts are pretty much neglected. Most of the songs are kind of Folk Rock or Folk Metal, sometimes vaguely reminding me of SKYCLAD, just more Irish. Wouldn’t be a problem with me if there wasn’t this feeling that CRUACHAN don’t really seem to know what they want. In my opinion, the album doesn’t really work as a unit: both the Black Metal as well as the Folk ingredients don’t sound necessary to me. It’s a bit like: “let’s do some evil stuff here and some folk there.” Luckily, the music manages to develop a certain flow, so it doesn’t sound too artificial but there needs some more work to be done next time. Solid female vocals. Probably the best song is the opener ‘Michael Collins’ but ‘Ard Ri Na Heireann’ is a terribly boring rock song that gets on my nerves very soon. ‘Some Say The Devil Iis Dead’ is a pretty cool Rock / Metal version of an old pub song and the bonus track ‘The Fall Of Gondolin’ works pretty good as well. Maybe the band might have allowed more female vocals on this one as well and worked a bit more on the contrast with the Black Metal vocals, but not necessarily. ‘A Thousand Years’ in a way continues the Irish Aisling tradition: it’s from the perspective of Ireland itself. Pretty easy to find out and not as complicated as Yeats, thank whoever you want to (maybe the band). To sum it up: there still needs something to be done to become Ireland’s answer to SKYCLAD but I think the band will handle this. Great cover artwork by the official illustrator for “Lord of the Rings”, John Howe, by the way. Can I have this one as a gatefold vinyl, please?