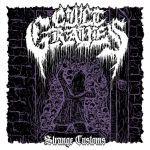 Godz Ov War Productions offers an EP entitled “Strange Customs” by CULT GRAVES, which is essentially a collection, containing the first demo of 2018 and the subsequent EP released in October 2020. Without any information being disclosed about the composition, without names, without anything, all that can mentioned about this project is that it consists of two people from the United States. That possibly justifies the source of the band name too. The band follows a brutal and very chaotic style of playing and the nine tracks that exist here, seemingly captured with intention to spill blood, invoke darkness and causing whirlwind madness. ‘Strange Customs’, ‘Astral Haunting’, ‘Cruor Upheaval’ are delivered in the horrific, terrifying and utterly chaotic tradition of BLASPHEMY and IMPIETY. It may sound like meaningless jumble, who can’t appreciate the style of repeating the same chaotic pattern and get lost in the monotony and general chaos that prevails. In that case, this disc is not for them. As soon as the EP section is over, the remaining tracks are originally from “Demo ’18” and are an exclusive bonus to the CD version. These demos sound like, recorded for old gravediggers who like to dig graves to the sounds of old DEICIDE, PROCLAMATION, IMPIETY or old CANNIBAL CORPSE. If not for gravediggers, each demo sounds like an avalanche that will pull you right into the abyss of total chaos to imagine a barbaric Black Death Metal inferno. The rumbling production (specially the demo tracks!), make sure that this inferno felt like a strange force. “Strange Customs” comes with an artwork by Oozing_death_art and hints about what awaits. With all these, no wonder, all exposed ones will be strangely forced to listen to them on repeat and follow CULT GRAVES for their upcoming releases. More about the band and label at: https://cultgraves.bandcamp.com, www.facebook.com/godzovwar.