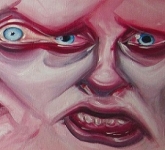 The five degrees of insanity are called ‘Alcoholic’, ‘Nihilistic’, ‘Misanthropic’, ‘Psychotic’ and ‘Satanic’. Sounds like some kind of poem. CULT OF OCCULT are hailing from France and during their five years of existence they already released three singles and two albums. "Five Degrees Of Insanity" is full-length number three and it is really a full-length. With a running time of 71 minutes expanding the capability of a compact disc. And only five songs, I guess most readers already sensed the style the band is playing. Personally I have never been a fan of that so-called Drone Metal. When the guitarist strums a string and you know this riff is going to last for five minutes or so. But CULT OF OCCULT is the first band I am impressed by. Deadly riffs drilling their way deep into your soul, every beat of the drum a pain in your brain and sometimes the vocalist drives you mad. I guess CULT OF OCCULT did nothing a band like SUNN O))) did not have done before. But for some reason "Five Degrees Of Insanity" is somehow more accessible. At least for me. And what about you? www.facebook.com/cultofoccult, www.deadlight.fr