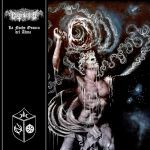 Godz Ov War Productions did it again – releasing a magnificent album. This time it is the debut by CULTO NEGRO, hailing from Costa Rica. The quintet released an EP called “ Abismal Speed Metal” in 2016 and that is a quite fitting description of what to except on “La Noche Oscura Del Alma” (the English translation is “The Dark Night Of The Soul”). Speed Metal, because the album is full-throttle ahead and the term “abismal” is fitting, because of the Black Metal elements. The album kicks off with ‘Espectro Lunar’ an instrumental intro, which makes already clear where the journey is going. Blackened Thrash Metal at its finest. But what distinguishes CULTO NEGRO from the bazillion of other Black Thrash Metal outfits? Well, there are a few things to mention. First of all the excellent guitar work, since electric amplified guitars are the core of Heavy Metal. Razor sharp Thrash Metal riffs team up with some fine 1980s Black Metal riffs (always remember: Black Metal was not invented during the early 1990s in Norway) and the soloing is top-notch. Rarely have I heard such a coherent combination of old school Black Metal riffs and high speed Thrash Metal. A perfect balanced sound, far away from a muffled old school impression. But also distant from the sterile and edgeless modern sounding productions. Boredom does not arise, because the songwriting is rich in variety, here and there little treats are thrown in. The singing is also quite varied, different kinds of deep grunting and aggressive, more generic Thrash Metal shouts. What makes the whole affair a bit special for my German ears is the fact that CULTO NEGRO consistently using there native Spanish language. Sounds pretty barbaric and perfectly fits to the occult and obscure lyrics, dealing with spiritualism, black magic, witchery and drugs. “La Noche Oscura Del Alma” is rounded up with the cover of ‘Desterrando A Los Oscurantistas’, a song taken from the self-titled debut of Argentinian Thrash Metal band HERMETICA from the year 1989. Still reading? Go and get more information by visiting the band at www.facebook.com/cultonegrocr or the label at www.facebook.com/godzovwar