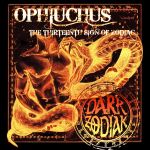 DARK ZODIAK began their journey of envisioned blend of Thrash and Death Metal back in 2011 and released their debut demo “Throwing Stones” in 2012. Two further full lengths followed in 2014 and 2017. And now they are back with their third full length, “Ophiuchus – The Thirteenth Sign Of Zodiac”. The combination of Thrash and Death Metal has always been one of the fiercest and most lethal ones among all types of genre combinations and is possibly one of the most difficult to make. “Idolatry” by DEVASTATION, “Tortured Existence” by DEMOLITION HAMMER, “Solstice” by SOLISTICE and “Ritually Abused” by NUM SKULL bring bone shattering Thrash Metal and a skull fracturing nightmare of Death Metal together. DARK ZODIAK, although nowhere near the ferocious sound or deadly visions of the aforementioned, are rather playing a groovier way to express themselves. The album starts with ‘Do More – Say Less’, and the title is self-explanatory. However, the following ‘Heaven, Earth And Beneath’ and ‘Invisible Apocalypse’ both possess moments which are varied and create a dense atmosphere with fat bass lines. Sadly none of their songs are memorable except their attempts to create headbanging and sing along parts and some gloomy atmospheric moments. The highly distressing and concentration-killer squeals delivered by the vocalist, mixed with the deep grunted growls, don’t really work and instead of becoming a successful mixture, it turns out terrible and successfully kills off the inherent strength of the compositions. ‘From Thrash Till Death’, despite its classy title, doesn’t have that energy at all and you don’t feel the urge to listen to it again. ‘2020 A. D.’ almost makes you feel the energy and power and is possibly the only strength of the whole record. Overall, despite being three albums strong now, DARK ZODIAK don’t have that raucousness which this genre demands. They have their vision, but it still deserves a nastier and more riotous sound. Only then they will be able to capture and deliver the essence of bone shattering Thrash Metal and skull fracturing Death Metal together. Explore more about the band here: www.dark-zodiak.net, www.facebook.com/darkzodiakmusik.