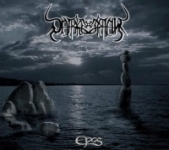 “Hey Dimitri, I’ve a brilliant idea for our new record. Why don’t we go for something really epic, you know, like one extremely long song, just like those MOONSORROW fuckers on their boring last record ?!? – Sounds cool, but at the moment I just got some rather lame riffs lying around which I wanted to use for my side-project UNHOLY WINTERFROSTMOONDESECRATION… – No problem man, we’ll just have to stretch them over a long enough time and throw in some breaks, atmosphere and stuff, you know ? – Yeah, and maybe I could also bring that chick I tried to bang last week, she claimed to play some of those weird classical instrument, like a real big fiddle… – Excellent, all art and depth and stuff! And if we still don’t get material of half an hours worth we just sample some ‘wind and sea’ – sounds from your daddy’s old BATHORY – records for like 5 minutes in the beginning and the end, atmosphere and shit, you know, I mean this is going to be EPIC! – Any idea for a name yet? – Well, it should be something real kind of, ähem, epic, you know, but I think I still have to think about something really cool to sum it all up… – How about “Epos”? – Excellent choice man, you’re a genius, did I tell you that ?! – Well that’s what I was trying to tell the cello-slut, but she didn’t seem to be convinced…” With good reason. www.no-colours-records.de