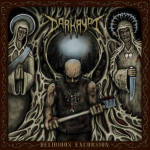 Actually I could keep it quite short here. The reason is quite simple because the debut album by Mumbai based old school Death Metal outfit DARKRYPT is one of the best and most convincing long players in this genre in 2016. And as you (as our loyal readers) know this year was quite not short in excellent releases. Despite not delivering something completely new this squadron’s walk on the ancient path is absolutely breathtaking and presented in a perfect manner with a lot of passion and devotion. It’s quite hard to find any weak point concerning “Delirious Excursion”. Everything fits perfectly here and all components blend very well together. Let’s start with the amazing songs of this nine tracker. After a short interlude the horde starts with ‘Darkrypt’ quite promising on their journey of the left hand path of Death. If you wouldn’t be aware of the fact that the four piece hails from India you would easily bet these lads are of Finnish descent. Their mostly mid paced dark Metal of Death immediately invokes the spirit of ancient cult acts like ADRAMELECH, old CONVULSE, old AMORPHIS, DEMILICH (minus the insane vocals of Antti) or similiar acts. Brutal heavy, chugging riffs and killer grooves refined with unholy dark melodies and leads. You can really hear that these deathbangers know their craft and are by far no rookies. The band clever varies the pace and speeds up or slows down the whole thing in order to create the right mood and atmosphere. Best examples are ‘Cryptic Illusions’ (with a guest appearance of Jack of all trades aka Rogga Johansson) or the marvellous ‘The Inducer’. This killer stuff grabs you at your neck right from the start and if you don’t bang your head till death then something might be wrong with you. The guitars are down tuned but not to the most extreme. The sound of the axes is thick and sharp and will shave your head without mercy or prior warning. Responsible for the mix was Greg Chandler who is well known for his work with CRUCIAMENTUM and similiar artists, so a master of his trade as well. Furthermore the entire album was mastered by the magic hands of Dan Swanö. So you have a guess that the production is top notch and will meet your expectations. The deep growls of Amey, who is also in charge of the four string department, are excellent and compliment the songs very well. The vocals are done in the right way, not too guttural or too deep, just the way it was meant to be. The drumming is tight as hell and unleashes the necessary power to punish all wimps out there. The album is topped off by the cool artwork by legendary Turkka Rantanen who is well know for his work and great drawings for DEMIGOD, ADRAMELECH etc. in the past. To sum it up: you really should do yourself a favour and immediately get a copy of this (still) hidden gem. If you are an old school addict you will not regret the purchase. For more info, ordering details or sound samples check out www.facebook.com/darkryptband or www.transcendingobscurity.com