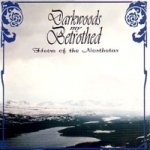 DARKWOODS MY BETROTHED
Heirs Of The Northstar
(Kvlture Records)
44:57min

Re-releases of certain albums are most often a cool thing in those types of cases whenever an original edition of some record is hard to find due to many reasons. Once there was this Korean label named Hammerheart Productions that released a great piece of Finnish Black Metal; DARKWOODS MY BETROTHED’s debut album, titled "Heirs Of The Northstar". This 3-piece, sort of ‘kvlt-ish’ Finnish Black Metal act, wasn’t that known by many since they started out in 1993 by using the moniker VIRGIN’S CUNT (‘o my dear Lord), and quite soon changing the band’s name to DARKWOODS MY BETROTHED a year later, in 1994. As far as the band’s Black Metal is concerned, even being measured by today’s standards, this trio’s raging Black / Viking Metal sounds incredibly fresh and updated, having a good balance between faster – and slower, more moody parts. Keeping in mind "Heirs Of The Northstar" was released in 1995, definitely adds a pretty vast amount of timeless value into it, attempting to reach all original and unique elements around its murky and dark forests-reeking template it can possible get in the first place. Pasi’s sand-dry, Black Metal gurgling sounds really like the guy has been in great, agonizing pains while laying down his vocal patterns for this opus – getting a solid backup from his band mates, off which Teemu’s surprisingly audible bass lines come to the surface of this recording very nicely indeed. Guest drummer Tero – as well guest keyboard player Tuomas (yes, that Tuomas from NIGHTWISH) both do their own share well too. It’s a great thing to notice that unlike on many Black Metal albums these days, Tuomas’ keyboard parts are far from being any dominating element in the songs of "Heirs…", but merely used only occasionally here and there to create haunting and sinister atmospheres – and in which he has also succeeded very well at. The album’s strongest candidate to win some extra pairs of ears, is absolutely the last song on this 7-song effort, called ‘Yggdrasil’s Children Fall’, lasting 16-minutes in length. The song reminds me slightly of BATHORY’s epic, Viking-era alá "Hammerheart", which cannot be a bad thing in anyone’s books, I guess. It’s an ambitiously composed tune, including lots of variation and depth in it. The song has been divided into 6 different chapters – and Tuomas has even composed the last chapter called ‘Act VI: A New Heaven, A New Earth’, all by himself. Unfortunately the clean sung vocal parts in this track give an impression someone has sung them while being totally drunk. I’m afraid to say this but they do sound fuckin’ terrible. But the greatly composed music makes it up for it, clearly placing this 16-minute epic an pompous song on the top of the whole pile. And yes, it’s simply awesome to see this record re-released now. Official DARKWOODS MY BETROTHED site: www.sacrifire.net/dmb/index.htm