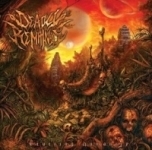 It is said that this American band started as a Death / Thrash Metal combo back in 2005 the year they were formed. Very few is left from the Thrash side as this is only deep and ultra brutal Death Metal. In other times I would be saying that they jumped on the wagon, but that was some 20 years ago… nowadays, I just realize they tried to be more brutal and have succeeded doing so. Yet, they have failed in doing it in a convincing way. Lyrically, we have read all that before with CANNIBAL CORPSE and SUFFOCATION many years ago. Musically, we can almost copy and paste the last sentences and we are done. Brutal, to the top Death Metal, with some stop-n-go riffs, and influenced by bands that have something to do with gore or end in ATION. Probably the parts were they impersonate SUFFOCATION are the better ones as in ‘Human Trafficking’, yet the vocals totally ruin it. You see, Frank Mullen does have a quite distinctive voice even if he does it in a super-low-growl mode, but the final result sounded brutal. With DEADLY REMAINS in this case, the final result sounds, too forced and quite bad frankly. Also the over the top production while might sound powerful to the uninitiated ear, makes thing to all sound the same. No, I am not against brutal Death Metal, already “Human Waste” proved many eons ago how it can be done, but then again mere copies need to be do something more to surpass the ancient ones. www.facebook.com/deadlyremainsofficial, www.deepsend.com