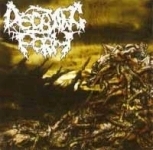 What we have here is the first release by DECAYING FORM from Australia. The band proclaims to coalesce both technique and brutality in order to form the future of Death Metal, if I understand the promo sheet correctly. Regarding the problem that different people have different definitions of what is "technique" and "brutality" (or even what is Death Metal) the answer if DECAYING FORM have achieved their goal must everyone deicide on his / her own. But putting such speculations aside, here is a description of what can be heard on "Chronicles Of Decimation". The speed of all tracks is very fast, the drummer is constantly blasting his way throughout the whole output. The guitar-work reminds more of Death Metal than the typical Grindcore riffs, but the vocalist is definitely more Grind than characteristic Death, a kind of high-pitched grunting. This style is difficult to describe, but if you have listened to Grindcore before you will recall some other bands using such vocals, for all other people the vocals must be nearly inaudible. The big difference between DECAYING FORM and the rest of the Death / Grind universe is the songwriting. At every time on this release it is stop-and-go. Blasting, break, blasting, break and so on. In written form this may not sound that spectacular, but when listening, it is really remarkable. If you may have thought a band like CRYPTOPSY is using unusual songwriting, then you have not listened to this here. At least there is one band that came to my mind when I thought about similar bands, and that is the John Zorn projekt NAKED CITY. So, you know what to expect on this release – not some kind of easy listening, instead music demanding the listener’s attention. So everyone who is willing to dare something really experimental should DECAYING FORM give a chance. http://decayingform.net