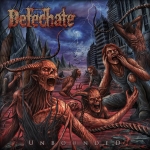 Let’s get this Monday going with some Italian Death Metal released by the French label Great Dane Records, a label that has been quite active the last few years, digging deep in the underground, finding some good bands here and there, and getting music out to the masses. “Unbounded” is DEFECHATE’s debut full-length album. The duo has an CD EP release on their backs, from 2020 and is now ready to take on the world with a little French help. The band is heavily inspired by the mid-nineties plus brutal Death Metal scene, grinding guitar riffing, slightly melodic leads, pounding drum patterns and semi-technical basslines. Though I really miss some coherence in the songwriting, not many riffs are connected, which makes the album feel like a rehearsal of different riffs, being set up next to each other, more than riffs bridged together to pack a pounding. The drumming seems a lot of the way programmed, and at other times poorly executed behind the set. The drum sound is not coherent throughout the album, the same goes with the intensity and the placement of the drums on the mix, which makes the final output quite poor. The basslines are as such the strongest point together with the vocals on this release. The bass is moving in and out of the sound picture quite coherent and delivers some nice grooves and shenanigans here and there, though a little more power and ummpf on the amping and mix would have done wonders for the 4 strings. The vocals are tough, in front of the mix, powerfully executed most of the time. Your classic deep guttural growl with a little barking and good scream here and there but is again suffering from different recording-settings and a poor mix. To be honest, the quality of this release is what I would expect of a demo release and not an officially label released album these days. There is no real flow in the songs, they all seem like compilations of ideas, not fully worked through. The production isn’t aligned in any matter. There are different levels on instruments and final output on almost all tracks, and no real ‘sound’, unless inconsistency is the sound of DEFECHATE? I can hear some good ideas here and there, but again, I don’t feel the music is worked through and complete and completed with a righteous mixing- and mastering-process. Though, if the music presented on this album is the final concept of DEFECHATE, peace with that, though this isn’t something I find nowhere near good and music that represents today’s Death Metal scene. More info at: www.facebook.com/defechate, www.facebook.com/greatdanerecords