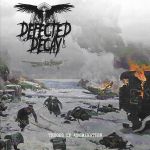 Based deep in the heart of the German Ruhr Valley area, DEFECTED DECAY are out to crush some bones and maim some bodies. Basically the same band as SUFFERSYSTEM, the duo dedicates its sound to the old school of Death Metal. Yet they don’t just praise one of the different sub-genres, but manage to find a sound of their own with their second album “Troops Of Abomination”. The foundation of this sound is a merciless groove in the vein of BOLT THROWER and OBITUARY, garnished with no-frills riffs that reminded me of GRAVE. On top we have sparse, but very effective guitar leads that sometimes tend to appear discordant on the first impression, but really get the listener hooked. The driving groover ‘Commit To The Fire’ that opens up the album already shows all the trademarks of DEFECTED DECAY. ‘Resist’ even has a certain touch of Hardcore while the abyssal title track comes along with decent staccato riffing and nasty double bass drums. With the gloomy ‘Siege Of Death’ and the heavy ‘Redemption Acquired’ we meet two more highlights before the incredible end of “Troops Of Abomination”. Incredible? Yes, because ‘Death March’ really is a masterpiece of Death Metal: an epic groover with a guitar theme like a barbed hook that finds its way directly into the brain. And thus ends a very fine surprise for the old fashioned Death Metal lunatic! Find out more about DEFECTED DECAY at www.facebook.com/defecteddecay and www.facebook.com/silentrecordswatcher