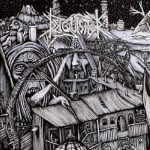 Denmark nowadays is a good breeding place for Death Metal. Bands such as SULPHUROUS, UNDERGANG, PHRENELITH, TAPHOS, HYPERDONTIA really know how to kick ass. One of those fine newer Danish bands is DEIQUISITOR and I have to admit that I totally ignored this Danish Death Squad so far just because of their crappy logo… To be honest I expected some kind of amateurish Black / Punk / Speed or whatever Metal crap, so I never checked them out. Now I know that this was not a very clever decision because I missed a cool old school Death Metal band. Anyway, let’s talk about “Downfall Of The Apostates” which already is the band’s second full-length recording. DEIQUISITOR created a damn fine piece of brutal old school Death Metal. The songs are mainly fast and thunderous, but “Downfall Of The Apostates” is a very varied album. Now and then MORBID ANGEL came in my mind while listening to “Downfall Of The Apostates”. It’s not just brutal and fast, the band combines bone crushing brutality with massive and heavy slower parts. The album has an obscure and sinister atmosphere and the vocals are ghoulish and roaring. Well, I definitely have to check out their older material as fast as possible and I highly recommend you to check out “Downfall Of The Apostates”. You won’t regret. More info at: www.facebook.com/deiquisitor, www.darkdescentrecords.com