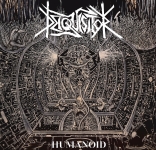 Brutal and crushing old school Death Metal that will make Ross Dolan and Robert Vigna quite proud, if they ever were to give this Sjælland based Danish band a listen. I first came across the band when they released the “Hexagon Vortex” MCD on Ancient Darkness Productions back in 2014 and I think I also have the self-titled debut full length laying around, released on Ancient Darkness as well. I’m not sure how closely I followed the band after that. Not that I didn’t like what I heard on the two releases. I was blown away by the dark, brutal and quite raw Death Metal, which was setting a new standard for Danish Death Metal. Time flew by and suddenly I stumbled across the band again, when they released “Towards Our Impending Doom”, I guess they saw these times coming. Yet a brutal offering of another world, a more mature and coherent version of the band, which makes sense, when thinking of the years passed. Now we are writing 2021 and the trio is ready with a new offering in form of this, the “Humanoid” EP on cassette by Extremely Rotten Productions, 12″ by Night Shroud Records and CD by Darkness Descent Records. 6 tracks of unrelentless Death Metal from two veterans of Danish Metal, HBC and TFJ, both having their first appearance on tape documented to 1992 and both have kept the flame alive since, in an array of great bands, and then the “newcomer” DA, who has his first recording documented in 2008. It is not to be heard that the music is written and performed by some being active within the Metal scene for so many years. The music is fresh, I won’t call it modern, though it is a new take on rumbling old school Death Metal with the old deeds turned around and assembled again, with a just as crushing result. There are tentacles back to when dark and semi-technical Death Metal took off in the USA, in the beginning and mid-nineties, though much more as well. The songwriting is seasoned, quite hooking with the raw and brutal sound in mind, there is a lot going on in the songs, though they are tightly knit together as a whole. All the tracks are packing a punch and show great songwriting skills, there isn’t a dull moment on “Humanoid”. Pounding and brutal Death Metal cloaked in a dark crushing atmosphere, 6 great tracks, I can’t really understand why DEIQUISITOR hasn’t received more praise, than it seems to be, though that’ll might change, if the sheeple are ready for such a kick! It is early to call out contenders for the praised top ten albums of the year here at Voices From The Darkside, though this release should be competing in the top. This is solid Death Metal all the way through, 25 minutes and 30 seconds of brutality and despair! Proceed to be close to a world below: www.facebook.com/deiquisitor, https://extremelyrottenproductions.bandcamp.com