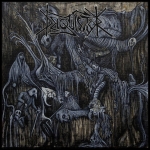 DEIQUISITOR is an obscure three-piece from Denmark and was formed back in 2013. After a demo release in 2013, their first EP was released by Ancient Darkness Productions in 2014 and Ancient Darkness Productions also managed to sign the band for their first full-length. After completing twelve new tracks the band will release their self-titled debut soon and presents themselves in quite a good shape on this output. The band’s style can be described as obscure Death Metal in vein of classic bands like IMMOLATION, INCANTATION, AUTOPSY or even MORBID ANGEL with in my opinion also obvious influences of Finnish bands like DEMILICH or ADRAMELECH so their music takes us back on a trip back to the early 90s. It is still amazing how many good bands are active in the underground and nearly on a daily basis new and talented bands are releasing really good material. But also it gets more and more difficult to listen to all material somebody introduces or recommends to me. So it took me a while to check their material and to give this output the deserved time and spins and I must admit that the material is not getting boring even after a handful of spins. Nearly each track has a running time of around three minutes and hits the listener straight into his face with its intense and dense atmosphere. Instead of writing long tracks, the band prefers to keep it short, simple and brutal. Listening to the material is like going through a wall of fog but the wall is their intense brutal Death Metal. The material is raw and unpolished and if you look for melodic or easy to catch stuff, this will be the wrong band to check out. Also the band prefers to write fast or minimum up-tempo material. Even though I think that they could be brutal as well if they slow down a bit, they prefer to keep it fast and brutal. Really obscure and oppressive stuff. The guitars are intense as hell, same goes for the drumming and the hellish guttural grunts really freeze my blood. The production is also very rough but perfect for the provided grim material. If you are in need for some brutal old school Death Metal stuff to get over the winter season, check out the band at following locations: www.facebook.com/deiquisitor or www.ancientdarkness.dk