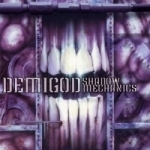 If you’ve read our intensive interview with DEMIGOD you should already be aware of the fact that the band has musically gone through drastic changes ever since their brutal Death Metal classic “Slumber Of Sullen Eyes” from 1992. Unfortunately I gotta add… But before I go into detail a little more, you should know that I really forced myself to listen to “Shadow Mechanics” over and over again in order not to sound unfair or anything like that towards a band I always admired very much. But the more I listened to the eleven songs, the less I liked most of them… Even though the whole album delivers a very high quality in terms of the musicianship, songwriting and production, this is by no means an album that their old fan base expects from DEMIGOD. The overall musical approach is simply too melodic, too thrashy and modern sounding, yeah partly even mainstream focused. This is actually an album which perfectly fits in between all of the current releases (especially from Finland). You get a very big variety of influences, from very heavy material, like the great opener ‘My Blood Your Blood’ or ‘Gates Of Lamentation’ up to extremely melodic, yeah almost melancholic sounding type stuff (‘Crimson Tears’). Then again there’s tracks like ‘Trail Of Guilt’ that even remind me on late AMORPHIS during their “Elegy” period. Those countrymen are actually a good comparison anyway when it comes to the musical evolution as both bands started out as really brutal underground Death Metal and throughout the years became more and more melodic and catchy sounding. “Shadow Mechanics” comes up with three different vocal styles, of which the brutal deep voice is still the one which fits them best, while the clean melodic singing sounds rather pathetic to me and is way to overused these days anyway. So, my conclusion is, despite the obvious improvement as musicians and songwriters, the members of the band shouldn’t have released this collection of songs under the DEMIGOD moniker. The market they have changed towards won’t remember their old material anymore anyway. And the old fans who still worship “Slumber Of Sullen Eyes” most certainly won’t get a kick out of “Shadow Mechanics” either, so… Overall not really a bad album, but definitely a disappointing DEMIGOD release!