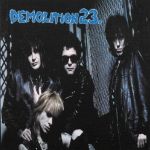 Anyone into good ol’ Punk Rock? For the majority of you reading this, Michael Monroe is probably someone you would never ever consider checking out in that respect, mainly because of his look, which basically inspired the entire Glam movement of the 80s… and we all know how much that was hated by Thrashers all around the globe. But never judge a book by its cover! Even though Monroe’s music is of course by no means related to Death, Black or Thrash Metal, the sixty year old Finn has proven his credibility and longevity for over fourty years now and never followed any trends at all. Sure, he might be best known for his past in the legendary HANOI ROCKS and his already long lasting solo career, but to me (and according to the liner notes, also to him) one of the best albums in his entire career was released under the DEMOLITION 23 moniker in 1994… and that only took about two weeks to record and mix. Musically you get old school Punk Rock here, which draws its inspirations from the early days of the genre, just better produced and with a high energy Rock edge to it. There’s ten great kick ass tracks including one ballad type song (‘Deadtime Stories’) on the original album and three of them are covers, which should already give you an idea what to expect from these guys. ‘I Wanna Be Loved’ was originally written by Johnny Thunders (JOHNNY THUNDERS & THE HEARTBREAKERS, NEW YORK DOLLS), with whom Michael even shared an apartment for a while back in 1985, together with Stiv Bators of the DEAD BOYS, a band whose track ‘Ain’t Nothin’ To Do’ was chosen for a cover on this album as well. Some of you might already be familar with the DEAD BOYS since OVERKILL covered the track ‘Sonic Reducer’ on their 1988 debut full length “Feel The Fire”. The third cover, ‘Endangered Species’, was the title track of 1982’s album by legendary English Punks U.K. SUBS. And if you know the originals, you pretty much can already guess what to expect here. Ten songs that easily will appeal to any fan of “Never Mind The Bollocks” by THE SEX PISTOLS (just listen to ‘Hammersmith Palais’, where Monroe perfectly copies Johnny Rotten’s way of singing), but also to fans of bands with a similar attitude like ANTI-NOWHERE LEAGUE, SOCIAL DISTORTION or SHAKE THE FAITH (a similar short-lived Punk Rock side project of Tommy Thayer, guitarist in KISS for the last twenty years). Lyrically song titles like ‘Nothin’s Alright’, ‘The Scum Lives On’, ‘Dysfunctional’ or ‘Same Shit Different Day’ should already speak for themselves. The DEMOLITION 23 line-up consisted of Michael Monroe on vocals, bass player Sami Yaffa (who also used to be in HANOI ROCKS), guitarist Jay Hening (of New York City based Glam Punk Rockers STAR STAR, who committed suicide in 1997) and American drummer Jimmy Clark (who also played on Monroe’s 1996 album “Peace Of Mind”). This was their one and only album, which was produced by Steven van Zandt, probably better known as Little Steven, the guitarist from BRUCE SPRINGSTEEN & THE E STREET BAND, who also co-wrote the songs on this album and who’s in charge of Wicked Cool Records, the label responsible for this re-release. When Little Steven was originally trying to shop the album around for a deal back then, all he got back was comments like “Punk is dead!”. Luckily at least Music For Nations recognized DEMOLITION 23’s potential and released it in 1994 nevertheless, but unfortunately never officially in the US. This big mistake has finally been corrected now with this re-release, which is available on digipak CD and vinyl (the latter for the very first time). It features three additional bonus tracks (great sounding demo versions of ‘Hammersmith Palais’, ‘Dysfunctional’ and ‘The Scum Lives On’) and the booklet comes up with lyrics to all of the songs, liner notes by Michael Monroe himself and a bunch of old pictures. So, if you’re an open minded music lover, this album is highly recommended! It was already great when it originally came out and still is after so many years. Unfortunately there’s no Facebook site for DEMOLITION 23 exclusively, but you will find more information about this release at www.facebook.com/michaelmonroeofficial or www.facebook.com/wickedcoolrecords