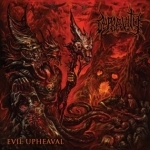 This time it is the very only DEPRAVITY from Perth, Australia; not to be mistaken with the half-dozen other bands of the same name. Although the band is still filed under newcomer they earned lots of appreciation, acknowledgment and admiration and this review is making no exception. Formed just two years ago and having one self-released EP in their discography “Evil Upheaval” is a monster of a debut. Brutal Death Metal is the name of the game and for me long-time running CANNIBAL CORPSE are, of course with some ups and downs, still the point of reference. Many tried and many failed, but what makes the difference between top acts like the mentioned undead man-eaters or acts like IMMOLATION, SUFFOCATION, SINISTER, INCANTATION, DRAWN AND QUARTERED or (just enter your favorite brutal Death Metal band here)? To me the nine tracks are an example of well-crafted songs in terms of song-writing and musicianship. We all know albums with not all songs on the same level and sometimes the listeners are about to experience even more fillers than killers. And I guess we all know tons of songs which are at large cracking but certain parts of the song are better than others. But when it comes to DEPRAVITY’s debut everything is nothing but eviscerating and disemboweling Death Metal. All instruments work together in perfect harmony in aim to dissect the listener surgically precise into slices. How much time the band spent in rehearsal room I do not know, but it must have been a nine-to-five job to forge such a solid and flawless piece of sheer Death Metal frenzy. The icing on the cake is the powerful sound courtesy of Hertz Studio (VADER, BEHEMOTH, HATE etc.), where mastering and mixing took place. Still reading? Do not hesitate and visit www.facebook.com/depravitydestroy, https://tometal.com