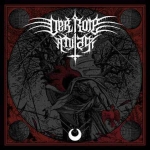 The bandname translated into English means red kite (scientific name: Milvus milvus), a medium sized bird of prey. In my ears it sounds pretty fitting for a Black Metal band. Although the band was formed last year the five members managed to record a decent and respectable piece of music. Two decades ago bands had to practice and play for years to reach this level. If my information is correct, two members are also playing in STELLAR MASTER ELITE, a Black Metal band from the same town (Trier) in Germany with three full-length outputs. So this may be the reason of the band’s high degree of songwriting virtues and musicianship. Eight songs (plus Intro) with tremolo riffing, acoustic and atmospheric interludes, hypnotic up-tempo drums overruled by an expressive and remarkable vocalist, somewhere between grunts and shrieks. Especially the slower parts benefit a lot from that special guitar melodies, forlorn and desolate, but at every time ready to attack and unleash hell. The way of mixing this sections together is pretty awesome, the adequate amalgam of emotions. And do not be fooled by the word "self-financed". This may be correct, but "Aus Der Asche" was recorded at Klangschmiede / Studio E by Markus Stock. The debut by DER ROTE MILAN is a very good example how to play Black Metal in 2016 without loosing the ancient feeling and at the same time being not just a cheap copy of bygone times. More info at: www.facebook.com/derrotemilan, http://derrotemilan.bandcamp.com