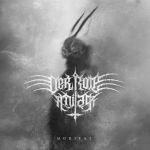 Three years after their debut German based DER ROTE MILAN are back and presenting "Moritat". In terms of content a travel some centuries back to times of the Thirty Years’ War and local tales and legends, so consequently the lyrics are completely in the German language. Concerning the music nothing has changed, you will notice Black Metal covering the whole scale of emotions from aggression to despair. But the six songs stay within the context of classic Black Metal with acts like MARDUK or DARK FUNERAL as inspiration, no sub-genres like War Metal or Suicide Metal are covered. Due to the balanced songwriting the album unfolds an impressive atmosphere, especially when listening in one go and not picking separate songs. The listener is taken and led by the curves of suspense and during the playing time you can easily get lost. Sending the audience on an atmospheric journey is one of the best things music can do. What I do not understand and reduces my listening experience: although the album was recorded at Klangschmiede Studio E by Markus Stock (known for his good work) at some moments the drums are delayed and somewhat off the track. That is annoying and a pity, but the overall impression remains: DER ROTE MILAN are playing in the first division of German Black Metal. For more info visit www.facebook.com/derrotemilan, www.ucdeath.com