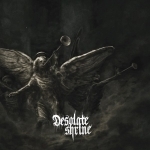 Let me grab this opportunity to say the debut of these guys from Finland, "Tenebrous Towers", is absolutely stunning! Released two years ago on the also Finnish Hammer Of Hate Records, it belongs to one of the best albums of 2011. That it didn’t end up in the list of yours sincerely is simply that this gem was discovered too late. But since then, songs like ‘Mouths Of Baal’ and ‘The Brightest Night’ are part of a daily playlist because they’re so epic yet marvelously brutal… it’s just great. This said, no one less than the mighty Dark Descent Records decided to release their follow up "The Sanctum Of Human Darkness" so hopefully DESOLATE SHRINE will get more attention worldwide. Compared to its predecesor, "The Sanctum Of Human Darkness" is a logic but not obvious follow up. It’s more dynamic, more atmospheric and also more crushing. The production is even fuller and sharper. It’s a good thing that L.L. (all instruments) has his own recording studio, ’cause this way he has no boundaries to express his vision into sound and everything is worked out in detail. Bass / guitars are so heavy as if they’re recorded ten times and melted together. With almost 55 minutes it features seven tracks including one midtro. Many tracks are similar to each other but all have their own character, so it’s probably conceptual. To compare this to any other band for those unknown to their sound left me guessing, but maybe GRAVE MIASMA playing SONNE ADAM comes close. Yep, still not quite accurate. ‘Demon Heart: The Desolate One’, ‘Funeral Chamber: Sacred Ceremonial Light’ and ‘The Chalice Of Flesh And Bone: The Eminent Of Chaos’ are masterly composed to epic levels unheard in Death Metal yet. It’s so intense, dark and savage that in combination with the slow tempo the listener is suffocated, downtrodden and squashed under a wall of sound. ‘Lair Of Wolf & 1,000 Lions: Nine Forgotten Names’ for example is so epic, it’s almost monumental and probably the best track on this album. Death Metal has many shapes and forms, but this possessed one is torment in an utter perfected form. In the current situation it’s unlikely to witness DESOLATE SHRINE on stage. I forgive them if they keep on releasing great albums like this one. For more info check www.facebook.com/desolateshrine, www.darkdescentrecords.com.