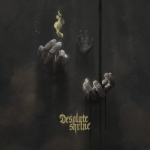 Lumbering riffs lurch forward as the veil lifts. No blistering speed, only the confident tempo of a despot. There is no hurry – there is a tone to be set. It is like the nightfall: it comes not at once, but slowly, its coming inevitable. These Finns merge Death with Black Metal and the outcome is a fry cry from what is to be expected when talking about such phenomenon – maybe because of the Funeral Doom influence. The outcome is a quite unique take on extreme Metal and a successful one at that. This is not music, played at blistering speed. An oxymoron, true, but even the fast parts feel slow (though truth be told, it is more mid tempo), such is the weight of those lumbering riffs. As if caught in the movement of water, its step might seem slow to the naked eye of an impartial observer, yet the currents within that drive the behemoth tell a different story. If maybe moderate in tempo there are still many excesses to be found. The sound is grandiose, there are different vocal styles present (courtesy of two vocalists), clean guitar parts and keyboard touches. Still, this is guitar driven music and most of the workload rests on their shoulders, though it is up to the drums to make the music more diverse. Recommended for all those fiends that like their Death Metal just a little bit black and not all about speed. Warning though: be ready to put in some time with this one. But once you do, the riffs will certainly get lodged in your mind. Venture here: www.facebook.com/desolateshrine, www.darkdescentrecords.com