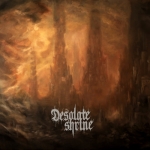 Yes! Finally and about damn time. I have been searching high and low to get a copy of this CD for the past 9 months. Hammer Of Hate Records folded with no luck in finding it for under $50 bucks on ebay. The band told me they didn’t have any copies and didn’t know if they were going to reissue it. I guess someone at Hellthrasher Productions realized this album was a hot commodity and recently reissued it. The reissue of the album does not come with any bonus tracks, it is not remastered, it is basically the same version that came out on Hammer Of Hate. Hey at least it got reissued and is now available for us diehards. My first chance to check out this band was either on Death.FM or another webradio channel that plays Death Metal / Black Metal (I can’t really recall) and it was for the song ‘Demon Heart: The Desolate One’ off the highly acclaimed second effort "The Sanctum Of Human Darkness". This Finnish band plays a more doomy atmospheric style of Death Metal reminiscent of the mid 90s era and adds a few hints of Black Metal. On this debut album we get the good chugging guitars and pounding drums, but there are times when the music drags a bit. The vocals here run from a deep growl to high-screeches that you would find in Black Metal. Overall ‘Mouths Of Baal’ and ‘The Brightest Night’ were the stand outs for me. The band changes this up a bit getting some Thrash moments in with the track ‘Chaos And Wrath’ and does a great job of making a setlist for a gig. This is a solid debut for DESOLATE SHRINE and if you haven’t heard their next 2 albums then you will be in for a good surprise. I am looking forward to what this band does in the future and what releases Hellthrasher Productions will issue out. For more info: www.facebook.com/desolateshrine, www.hellthrasher.com 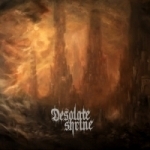 DESOLATE SHRINE
Tenebrous Towers
(Hammer Of Hate Records)
46:23min
This is perdition… like falling into an endless chasm… suffocating from invisible hands that will grab your neck and will slowly start to use more strength until you are about to pass away…to then re-awake your miserable soul just to make you suffer more and more… that is what this epic debut release of this band from Finland sounds… many months ago a few preview of the songs to be contained here was more than enough to make me counting the days for the release of this release… and for all damnation empire’s, it was more than worth the asphyxiating wait…crushing and pummeling suffocating Death Metal of the highest caliber… imagine the brutal guitar sound of early ENTOMBED, with the agonizing sound of AUTOPSY and add to that more than a few DARKTHRONE references (from the first AND second albums) and you will probably get an idea of what I am talking… the cover art, band name and title could not be more precise…this is the damned DESOLATE SHRINE which using mostly mid-tempo phases but whilst also injecting enough ultra-fast parts, grabs the listener in a desperate and asphyxiate atmosphere that will not let you go until you are a corpse…also this is a release that will do no justice by listening to it once… every time some new form of dark and obscure abhorrence appears… again and again… some songs length are just so painful it lacerates even more the consumed and tired flesh…doomed and black desolated death will be the final answer…what a magnificent release… this is what agony might sound lie after all…a painful and asphyxiating agony that is… no matter the fear this might invoke, this is a must buy… for those awaiting the end of the world. www.hammer-of-hate.com
Julián “Tenebrous” Núñez