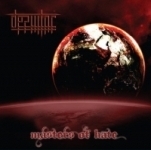 When you stumble across this band and read the name, you will imminently think it is something completely different to what it really is. I should say that I thought this would be another Bestial / War Metal endeavour for some reason but I was ridiculously wrong! Stockholm, Sweden based DESULTOR is spewing high-energized thrashy Metal which even reach Death Metal levels of aggression at times. Adding to that, when you press play, you will expect some growls to accompain the music and then you will realize the vocal attack is something completely different. Both music and vocals have a subtle NEVERMORE influence to it, which in my case is most welcome, given that I’m a huge fan of that band. Another possible reference point could be the DIMENSION F3H (NOR) debut album. Nevertheless, DESULTOR manage to incorporate some other influences into their music to make it more catchy and entertaining. The thrill factor for me is their natural ability to come up with these unpredictable twists and turns all way through the album. The choice of keeping the songs short, direct, with a crisp crystal clear production were the best they could do to present this debut to the masses! This will hardly appeal to the more "old school only" Metalheads but I think your should check them out just to get out of the ordinary and enjoy some violent Metal played with balls! Ask for their album here: www.officialabyssrecords.com. For all further info go here: www.myspace.com/desultorsweden, www.reverbnation.com/desultor