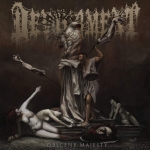 Good news: DEVOURMENT are back and in very good form with their fifth full length album. Almost 47 minutes of slamming brutal Death Metal under the title "Obscene Majesty" and recently released by Relapse Records. Yes, if you’re into this kind of extreme and ultra heavy Death Metal sound, this album is made for you. It’s not as killer and groundbreaking as their debut album "Molesting The Decapitated", but it’s for sure a breath of fresh and rotten air for the brutal Death Metal underground and for DEVOURMENT’s career too, since they came from a couple of pretty disappointing releases. This album marks the comeback of Brad Fincher behind the kit, this guy is responsible for the drumming on their first three demos and "Molesting The Decapitated". He inherits the sticks from Erik Park, another legendary drummer for those familiar with brutal Death Metal. Then we have: Ruben Rosas (mister guttural growlings), Chris Andrews (eight strings guitars) and the new entry Dave Spencer (bass). A total of ten tracks whose lyrics deal with gore, torture and disease in the purest American Death Metal tradition. The strongest point of "Obscene Majesty" is the sound / production: filthy and heavy from beginning to end, this album gives a sense of non-stop sickness and putridity, just like the highest standards of this genre require. "Obscene Majesty" hasn’t a polished or overproduced sound, no, on the contrary it is raw, fatty and brutal to the bone. The vocals are low, abominably inhuman and ultra guttural (no effects are used), whereas the riffs follow perfectly the dictates of the genre: downtuned guitars with a good amount of slow and suffocating parts, all alternated with furious and schizophrenic accelerations. It doesn’t matter if the riffs are slow or fast, because the drumming blasts away everything like a machine gun. Here we have tons of well-reasoned rhytmic parts: doublebass, rolls, accents, blastbeats, gravity blast… yes, you’ll get the whole package of extreme Metal drumming. What can I say more? This album is a shine example of American utter brutality. "Obscene Majesty" is the perfect soundtrack for a murder: get your copy without hesitation! More DEVOURMENT information at www.facebook.com/devourmentofficial, label contact: www.relapse.com