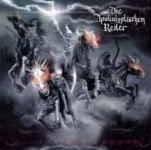 If I have to be really honest, I must admit that I was never that impressed by the first two albums of DIE APOKALYPTISCHEN REITER. They were always a rather experimental band, but the way they explore the boundaries of all the different kinds of Metal on “All You Need Is Love” is really impressive this time! It’s rather hard to find a decent description of their music: the more extreme styles (Black / Thrash / Death Metal) are the most present but the band is not afraid to build for example some quiet piano-parts in their songs as well. The production (done by Andy Classen) is very well done, because besides all the brutality, you can still follow and hear very clear what’s going on. One other very important factor which makes this album so catchy is that besides the many experiments which are going on, the album remains very catchy. I mean, you don’t have to listen to it ten times before you get the clue behind everything, a track like for example ‘Unter Der Asche’ or ‘Reitermania’ already rules from the very first time you listen to it. Another important factor is that the band doesn’t take everything too seriously, just take a look at Abbath, the Reiterdog in the CD-booklet, if that one doesn’t make you grin, well… To sum it up: “All You Need Is Love” is a very well played / produced Metal album for those who dare to try out something different. Very well done!